If you want to convert electrical power into Watts to AmpsIn order to convert from W to A, it is necessary that you have a minimum knowledge of electronics.

Since you probably don't remember the power formulas to obtain the electric current, here is one calculator to convert from Watts to Amperes in direct current and alternating current lines. In the latter case, you can also differentiate between single-phase and three-phase lines. 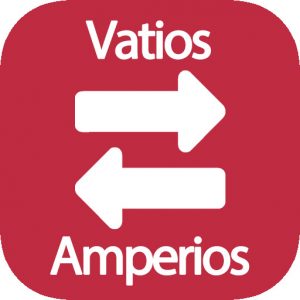 The watts or watts in English is an electric power unit of the International System of Units.

Your unit is represented by the letter Wso that one watt represents the electrical power produced by 1V and 1A of current. If we take into account Ohm's law, we could represent it as follows:

How to convert from Watts to Amps

The current or intensity in Amperes is equal to the power in Watts (W) divided by voltage in Volts. This can be seen in the following mathematical formula:

If you do not know the voltage value, it may be that the Ohm's Law can help you if you know the resistive value of the device.

If our electrical installation uses single-phase alternating current If a single-phase power supply is used, then we can calculate the phase current in Amperes by dividing the power P in Watts (W) by the product formed by the power factor multiplied by the voltage in Volts.

If the explanation is not very clear, this is the mathematical formula that summarizes the above expression:

Please note that the power factor of a purely resistive load is equal to 1. typical power factors although we recommend that you use the exact one so that the calculations are as accurate as possible:

In three-phase installations, we have to differentiate between phase-to-phase and phase-to-neutral voltage. The formula to be used in each case is detailed below:

If you have a three-phase installation and you want to calculate amperes from Watts knowing the phase-to-phase voltage, this is the formula to apply:

We finish with the formula for deriving the current from the power in three-phase installations with phase-neutral voltage:

We hope that with these formulas, you will already be able to convert amperes to watts in any of the possible variants.

How many watts does an ampere have?

Saber How many watts is 1 ampere? will depend on many factors so let's make a generic example.

Yes you go to a campsite and they tell you that they only offer you 1 ampereIn this case, they are talking directly about direct current, which is the one used by our electronic devices. Therefore, we apply the first formula and we see that:

It is a fairly fair power but for some appliances and low consumption lighting may be worth. The normal thing is that in a campsite they offer you higher powers up to 5 amperess in some cases.

Let's see another example. Imagine that we have a transformer that converts the 220V alternating current that arrives at home into a direct current of 14.85V and 3.05A. How much power does the transformer have? Applying the formula of the previous example, we have the following:

How many watts does a refrigerator consume?

If we look at some of the best-selling coolers Currently, their power in watts varies according to parameters such as energy efficiency or capacity in liters.

For example, a full-size A+++ energy class refrigerator can consume 179kW per year, which represents a power consumption of about 490 watts per 24 hours.

A refrigerator of similar characteristics but with energy class A++ consumes 245 kW per year, which means 671 watts per day. As you can see, the difference is quite large and we will certainly notice it in the electricity bill.

There is often confusion with Watts and Volts but are they the same? The answer is no.

If you want to switch from watts to hp, then we recommend you our hp to kw converter.

In this case we are also talking about power units but instead of being electrical, it is mechanical power so it is better to deal with it more exhaustively in the link we have left above these lines.