In both cases, you will obtain the subtraction of two fractions in irreducible format to solve any mathematical problem.

How to subtract fractions with the same denominator

In the example that we propose in the picture you can see three fractions with denominator 6 that we have to subtract. What we do is to keep the six as the common denominator and proceed with the subtraction of the numeratorsresulting in the fraction 3/6 which is not irreducible.

If we want to simplify it further, we can divide the numerator and denominator by 3 (a common factor of both), resulting in 1/2. If there had been no common factor, it could not be simplified any further but this is something you can check with our irreducible fraction calculator.

How to subtract fractions with different denominator

If what we want is subtract fractions with different denominatorIf you are not sure, you will have to do some more calculations. Anyway, the process to follow is summarized in the following steps: 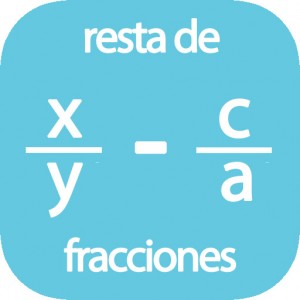 In the proposed example we see that we have as denominator the numbers 4, 3 and 5. find the least common multiple of these values, we arrive at the number 60 as the result. This means that the three equivalent fractions will have that value in their denominator.

Now we have to look for the equivalent numeratorsFor this purpose, we apply the procedure described in the third point:

This has to be repeated with all the fractions involved in the operation and when they all have a common denominator, we simply have to subtract the numerators. It does not matter if we are left with a negative numerator, it is a completely valid result.

In the proposed example we see that the resulting fraction can be simplified a little more. If we enter the irreducible fraction calculator and enter its value, we will see that -126/60 is equivalent to -21/10. It is always convenient to express the final result as simplified as possible.

In case you need to continue doing operations with fractions and it is not a subtraction, we have a calculator for you that will allow you to perform numerical conversions or calculate addition, multiplication, division and other operations with numerators and denominators.