The Snell's Law calculator allows you to find any of the four unknowns involved in the formula for calculating the angle of refraction of light passing from one medium to another with a different refractive index.

All you have to do is select one of the following variables in the calculator in the Snell's Law:

When you have selected the variable, fill in the values of the rest of the unknowns and press the calculate button to get the result. If you have the angles of incidence or refraction in radians, here you can to grades. 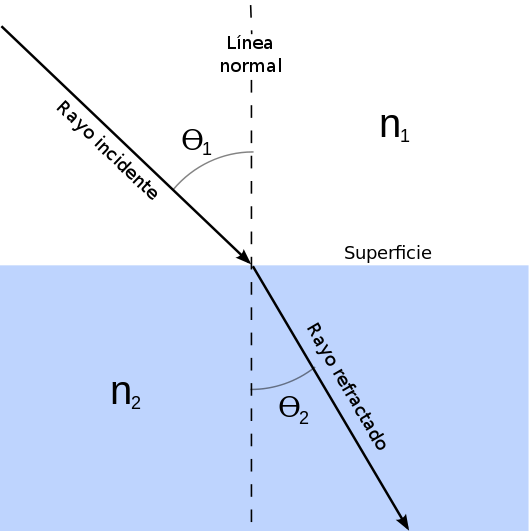 The Snell's Law formula is as follows:

Where i and r are the angle of incidence and the refracted angle respectively.

To know the demonstration of the Snell's Law formula we must first know the laws of refraction:

For example, the relative refractive index of medium 2 with respect to medium 1 is this:

While the relative refractive index of medium 1 with respect to medium 2 would be this one:

If we relate the formula of the relative refractive index to the second law of refraction, we have that:

From there, the expression of Snell's Law is deduced, and its formula is demonstrated:

We have spoken on several occasions about the refractive index But what exactly is it? The refractive index is a number that tells us the relationship between the speed of light in a vacuum (c) and the speed (v) of propagation in that medium. This can be expressed mathematically with the following formula:

There is a phenomenon called total reflection and it occurs when theLight passes from one medium to another with a lower refractive index.resulting in refraction away from the normal.