Do you need change from RPM to rad/s? With our online calculator you can change from revolutions per minute to radians per second and vice versa by simply typing the numerical value and pressing the calculate button to get the result automatically.

If you also want to learn how to change from rpm to radians or the other way around, read on because we explain how to do the conversion with the formula, solved examples and more.

Relationship between RPM and rad/s 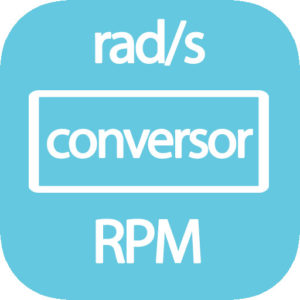 Before learning how to change from revolutions per minute to radians per second and vice versa, let's see the relationship between the two units of angular velocity.

From the above equivalencies, we can easily deduce the formula to be used to convert from RPM to rad/s or the other way around. Let's see how it is done in each case.

How to change from RPM to rad/s

The formula for converting RPM to rad/s is as follows:

The above formula can be simplified a little more if we solve the 2π/60 operation. By doing so, we are left with:

For example, we will calculate how much is 3000 rpm at rad/s as a practical example:

How to change from rad/s to RPM

We already know how from degrees to radians but here we will learn to convert rad/s to RPM with the following formula:

In the above formula you only have to substitute in w the value of the angular velocity in radians per second and you will get the result in revolutions per minute.

If you want the above formula more simplified by means of a conversion factor, we can solve the 60/2π and substitute. In that case, we would be left with the following:

Thanks to the above formula we can easily see that 1 radian per second is equivalent to 9.549296 revolutions per minute..

For the avoidance of doubt, let's look at an example in which we will calculate how many RPM there are in an angular velocity of 50 rad/s:

As you can see, the procedure is quite simple to solve.

If you have Excel installed on your computer, you can convert the Microsoft spreadsheet program into a converter of revolutions per minute to radians per second and vice versa. To do this we will simply transfer the formulas we have seen in the previous two sections to the program's language.

RPM to rad/s in Excel

For the conversion of revolutions per minute to radians per second we will use the following expression:

rad/s to RPM in Excel

For the inverse conversion, that is, to convert from radians per second to RPM, the expression to use in Excel is this:

Again, we only have to change the value of C3 to the one we want to convert.

If you will only need to move from RPM to rad/s or if you want to check if the exercise you have done is well solved, you can use our online calculator to make the conversion immediately and without errors.

Of course, if you have any questions about the conversion, the formula, an exercise you have or how we have calculated the conversion factor, leave us a comment and we will help you clear up your doubts as soon as possible.