Do you need to change from decimal to Roman numerals or vice versa? Don't worry. With our Roman numeral converter you can calculate the equivalence between the two number systems. Simply enter the corresponding digit in the decimal number (up to 3,999) or Roman numeral field and press the convert button to obtain the equivalent.

If you want to calculate a date in Roman numerals, with this other tool you can do it as well:

This converter will be very useful for you if you want to know my date of birth in Roman numerals.

Although we hardly use them nowadays, the Roman numerals is a numerical system that emerged in the time of Ancient Rome and was used by the Roman Empire in their daily life, however, today it is still present in some aspects of our life so it is important to know them.

If you don't know how the Roman numeral system works, here you will find the main symbols used, their equivalence and our converter that will convert from Roman numerals to decimal numbers or vice versa instantly.

For interpreting Roman numerals there are a number of rules that must be taken into account, which are detailed below:

Taking into account these Roman numeral rules You will write any number correctly, but if you have any doubts, you can use our converter to check that you have done it correctly. 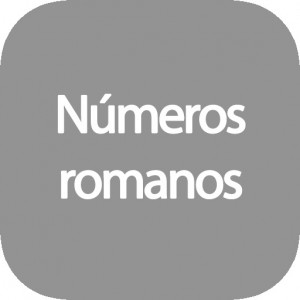 To better understand how to put it in Roman numerals In this section we are going to show you some exercises solved with different figures.

If you have doubts about how to write a Roman numeral, leave us a comment and we will help you as soon as possible.

If you have Excel installed on your computer, you can create your own Roman numeral converterIn other words, the program will transform a number in decimal format (our system) to Roman, but the reverse change cannot be made.

With the above example, you will pass the number 500 in Roman. If you want to try any other amount, just change that number or point to a cell where you have written the number in decimal format.

For example, if we want to know how much is 2015 in romanusing this method Excel will return MMXV. Easy, isn't it?

The only limitation of using Excel as a Roman numeral translator is that it only accepts amounts up to 3,999.

How the Roman numeral translator works

Our Roman numeral converter has been designed to be able to convert from Roman to decimal and vice versa numbers up to 3,999.

Just type the amount in the appropriate cell, click on the convert button and you will automatically get the amount you want to convert, translated in the other number system.

If you need to work with Roman numerals, it is essential that you know the value of the main symbols used to express numbers in the Roman numeral system.

In the following conversion table you will find the Roman numerals and its translation to decimal number so that you know which is its equivalent in our numerical system:

Note that for numbers greater than 4,000, a horizontal bar is placed above it of the Roman numeral, thus indicating that we are multiplying by 1,000.