The only thing you have to do is to select the number of resistors that are placed in series and write the value of each of them in ohms. When you have it, press the calculate button and you will get the result of the equivalent resistance in ohms and in Kohm.

Connection of resistors in series 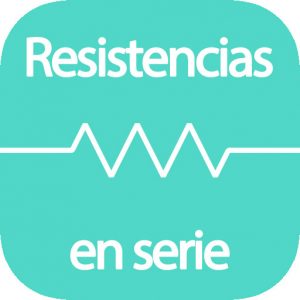 To identify a series connection of resistors we simply need to note that the output of one resistor is connected directly to the input of the next resistor.

In the case of a parallel connectionThe inputs of the resistors are linked together while the outputs of each resistor are also linked to the output of the other resistors.

When solving problems or exercises with resistors in series, remember that in this configuration the same intensity or current flows through all resistorsOn the other hand, the voltage will be different depending on the resistivity of each one of them. If you need it, here you have a calculator based on the resistor color codes.

For adding resistors in series we simply have to add the value of each one of them, thus obtaining the value of the equivalent resistance as indicated in the following mathematical expression:

By example,Let's imagine that we have the following example in which we have connected in series two resistors of 100 ohm and 300 ohm as shown in the following figure:

Applying the formula we have seen previously, we have that:

As you can see, calculating the equivalent resistance when a series connection has been made is really easy.