Do you want to calculate if a year is a leap year?We have a calculator for that! Just type in the year and click the calculate button to find out if it is or not.

Why do you want to know if a year is a leap year? Mainly, people who want to know it is because the month of February becomes 29 days instead of the usual 28.

What is a leap year? 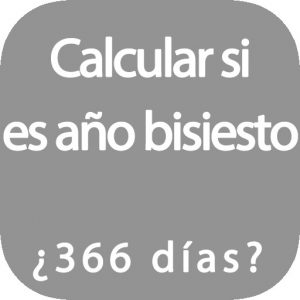 A leap year is a year in which the month of February has 29 days, an anomaly that occurs every four years for a very particular reason, but what is it? Let's see it in the next point.

Why do leap years exist?

A year does not have exactly 365 days. Specifically, it has 365.24219 days, which means that in each annual cycle, we added 5 hours, 48 minutes and 45.25 seconds additional days. After four years, this extra period adds up to almost one additional day, which is added in the month of February to make it 29 days.

How to calculate a leap year

The condition for a year to be a leap year one of the two conditions must be met following:

If you want to save you these two operations, you can use our leap year calculator to obtain whether a particular year has 366 days or not.

How many days are there in a leap year?

Yes, 2016 is a leap year and therefore meets the conditions for it, which means that February becomes 29 days and delays a little more the arrival of the payroll. A pity but we will have to wait an additional 24 hours.

The cycle to have a leap year occurs every four annuities, which means that 2017 is not a leap year.

What is the next leap year?

The next leap year we will have will be in 2020, in the meantime, the rest will be normal.

Fate is capricious and wanted events such as the assassination of Ghandi, Martin Luther King or the sinking of the Titanic, which caused the death of many people, to coincide in leap year.

As a result of these coincidences, there are many who think that years with 366 days bring bad luck but the truth is that misfortunes happen all the time, regardless of the year, so I dare say that leap years do not bring bad luck.

For all those who think that it does bring bad luck, I recommend you to see life from the totally opposite point of view and that is with total security, very good things have also happened in those periods, but as we often do, we are weighed more heavily by the negative than by the positive.

I insist, leap or not, bad things and good things happen every day. It is a matter of destiny that we write and although sometimes it is not in our hands, we can always try to make it as good as possible.

As we have seen at the beginning of this article, for a year to be a leap year, one of the following conditions must be met:

In both cases, the division must be exact, that is, the remainder must be zero.

These two conditions can be easily written in javascript to develop a calculator like the one we offer in our web. Here is the source code of the function:

With the above code we can calculate if a year is a leap year in javascript.