Convert from KW to hp is something that we all may need at some point if we want to know the equivalence between these two units of power. It is not uncommon to look at pages of imported cars and see that the power of their engine is expressed in KW (KiloWatts) instead of the CV (horsepower) that we usually use.

Calculates the equivalence between KW and hp easily thanks to our online power converter and remember that if you are thinking about buying a car, you should consider whether it is more worthwhile to buy a diesel or gasoline.

How to convert from KW to hp

You have probably wondered on more than one occasion how to calculate the power of a car. For from Kilowatts to horseswe should know that:

From the above equivalence, we can derive a mathematical formula to convert from KW to HP with ease:

By example,we are going to pass to CV a power of 34 KW:

For a clearer view of the KW to hp ratioLet's look at one more example of how to convert kilowatts to horsepower.

Returning to the previous formula in which we have seen that the equivalence is that 1 KW is equal to 1,3596CVIf we are using a power plant, we can know how many horsepower is 70 Kilowatts:

In the end, it is a simple multiplication that we can perform in any calculator.

Equivalence of HP to KW 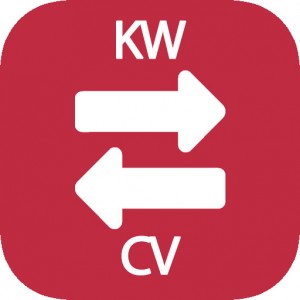 Therefore, the formula we have to apply is as follows:

As a practical example, let's undo the change we have made in the KW to hp transformation:

We have just seen that 1 horsepower is equivalent to about 0.74 KW if we round to two decimal places. In Watts, 1hp equals 740W.

Simply we have multiplied by 1,000 to go from kilowatts to watts.

How to know the horsepower of a car or motorcycle 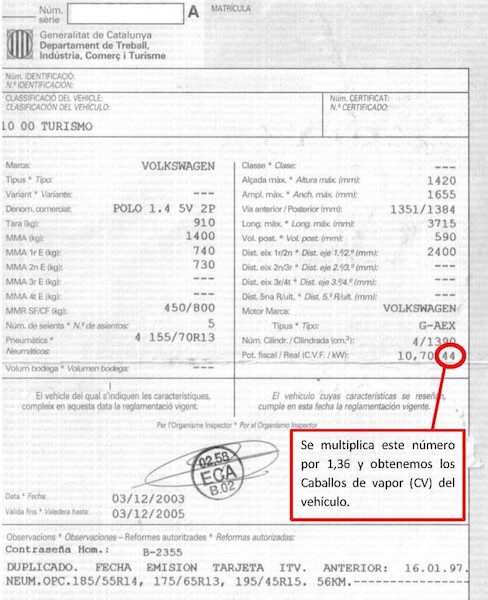 If you are not very clear about how much horsepower does your car or motorcycle haveIf you have any doubts, the best way to find out is to go to its technical data sheet. Its appearance is very similar to the one in the photo above and it is also a mandatory document, so you will have it in your vehicle along with other papers.

To find out the horsepower of your car or motorcycle, all you have to do is to search in the technical date for the actual power of the vehicle, a value that will be expressed in kW.

Take the kW of power and enter them in our calculator or multiply its value by 1.3596 and you will get the CV it has.

It may be the case that in the vehicle's technical data sheet the power is already expressed in hp (not to be confused with fiscal horsepower), so you would save the calculation for know how much horsepower the car has.

Many of you are wondering how you can change the taxable horsepower to horsepower and the truth is that there is no equivalent formula for doing so.

The fiscal power is a number that is used by the municipality for know how much you have to pay in road tax of that vehicle. If we look at the formula used to calculate the fiscal power of a car, we can see that it has nothing to do with hp.

These are the formulas for calculating tax horses in Spain:

There is also another formula for calculating the fiscal power in rotary electric or combustion engines:

Based on the foregoing, we can determine that there is no concrete formula for from fiscal horses to CV. Therefore, it is best to look at the power value expressed in KW and make the conversion to hp using our calculator.

If you still want to check the tax horsepower of your car, we have a few tables published in the BOE in which we can see the fiscal power of a vehicle, its average price during the first year after first registration, number of cylinders, emissions and other important data.

Below you have a table of equivalence between these two power units so that if you wish, you can print it and keep it in a place where it will be useful to you.

Other ways to measure the power of a car

When we talk about horsepower, we must not confuse CV with HP as there are differences between the two:

As they are two different units, they are also have different equivalents as you can see below:

If you want to work with horsepowerdo not miss our converters for:

The horsepower is an English measure of power. and the acronym HP stands for horsepower.

When the Decimal Metric System was introduced, an attempt was made to find a unit that would alternative to horsepower and hence the steam horse was born. (hp) which is approximately 1.37% less than horsepower.

At present, the CV are a very common unit to speak of powers within Europe and Spain, although in other countries it is preferred to speak in terms of "powers". HPor what is the same, horsepower. Anyway, if you look at the technical data sheet of your car or motorcycle you will see that the engine power comes in KW so you will have to make the corresponding conversion to CV to know its equivalence.

How the KW to hp converter works

In case there is still any doubt as to how our converter is used to obtain the KW to hp equivalence and vice versa, we have recorded a video in which we show you how to use it to clear any kind of unknown.

KW and hp in electric cars

Keep in mind that with the proliferation of electric cars and vehicles, it will be more and more frequent that we find the power units expressed in KW and we have to change them to horsepower if we want to know its equivalence with the unit to which we have been so long accustomed. For example, the Tesla P90D declares a power of 568KW which is equivalent to about 761.7 horsepower. not bad, right?

But why are manufacturers going to give us the power of electric cars expressed in kilowatts? Basically because that unit is for electric power (remember, it's electric) so the correct way to do it is that. Fortunately, calculating its equivalent in horsepower is easy and you can do it with our converter or by doing a simple multiplication of the power value by 1.341 as we have already seen.

Once electric cars occupy the majority of the vehicle fleet, we will have become sufficiently familiar with this unit.

Anyway, you can use the comments of the post to leave us any questions you may have about how to convert from hp to kW although we hope that with the information we have provided you, we have helped you enough. If you can share this post in your social networks we would also appreciate it very much as it is a way to show us that the converter has helped you.

Why is power expressed in KW and not only in hp? 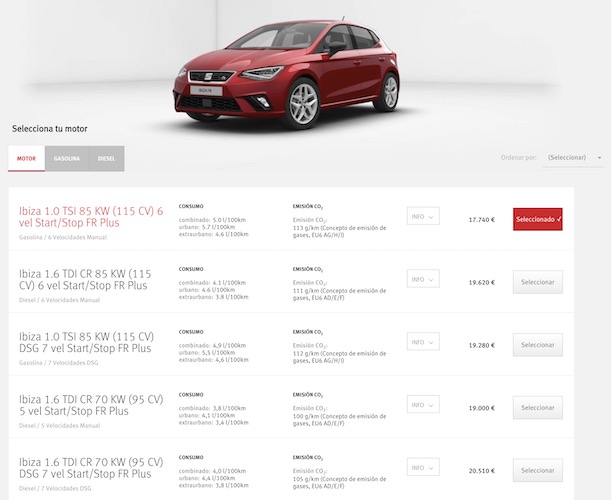 You are probably wondering why the engine power is expressed in kilowatts when we are all used to units in horsepower. The answer is easy and it's basically because it's marked by the Law 32/2014 of December 22 which requires the exclusive use of units of the International System of Units, something that CVs do not comply with. On the other hand, both the Watt and the Kilowatt do form part of the SI.

For this reason, manufacturers are required to include the figure of hp with its equivalence in kW. otherwise you would be incurring in something illegal. Even if you sell your second-hand car, you should do so as well since you could even be fined up to 90,000 euros or 600,000 euros if the infraction is very serious.

Now you know why manufacturers continue to show the power of their cars in kW despite the fact that hp is a more commonly used unit in vehicles.