Do you need convert from Kcal to Kj or from Kilojoules to Kilocalories? Use our online converter and you will automatically obtain the equivalence between these two units of energy that are so present in our daily life through food.

If you want to know more about the Kj and KcalRead on as we will tell you many interesting things.

Difference between Kj and Kcal

What is the difference between Kj and Kcal? Although both are units of energy, they are completely different and should not be confused.

To avoid confusion, we usually foods express their energy intake in Kcal or in both units but it is unusual to find the table only in Kilojoules.

Where there are more confusion is between Kilocalories, Calories and Calories. although fortunately, it has already been standardized enough to avoid misunderstandings. We could say that:

In short, the difference between Kj and Kcal is given because they are different energy units so, in order to clarify the doubts, let's find out how to calculate the equivalence between one and the other.

Oh, I forgot, do you know the recommended daily calorie allowance that correspond to you? Calculate it from the link we have just left you.

How many Kcal are there in 1 Kj? Surely you have asked yourself this question many times after seeing a table with the energy information of a food. Well, you should know that in 1 kilojoule there are 0.239006 kilocalories.

How to convert Kilojoules to Kilocalories

Now that we know the equivalence of Kj to Kcal, let's see how to convert from Kilojoules to Kilocalories. To do so, we will simply have to apply the following mathematical formula:

For example, we are going to convert 4200 Kj to Kcal to see its equivalence in kilocalories and for this we will use the above formula:

As you can see, the conversion is very simple so now let's learn how to do it the other way around, i.e. from Kcal to Kj.

If what we want is change from Kilocalories to Kilojoulesthe formula to be applied is as follows:

A typical example is to calculate how many Kilojoules is 1 Kcal. The answer is obvious and we do not need to make calculations having the above formula. Therefore, we can immediately deduce that 1 Kilocalorie is 4,184 Kilojoules..

Transform Kj to Kcal in Excel

If you want to make your own Kj to Kcal converter and you have Excel installed on your computer, you can create one in a matter of seconds.

Just open a new spreadsheet and type in an empty cell the following function:

To make it work, you only have to replace the coordinates C3 by the coordinates of the cell in which you have written the number of Kilojoules you want to convert into Kilocalories. If you prefer, you can also write the quantity directly there.

For example, if we know that a banana has 439 Kj and we want to know how many Kcal are, we will write the function as follows:

Convert Kcal to Kj in Excel

To convert Kcal to Kj using Excel, we have to repeat the steps we have seen in the previous point but with the difference that we will have to use the following function:

For example, if we know that an apple has 72 Kcal, how many Kilojoules is it? To do this, we enter the formula in Excel and press the Enter key to get the result automatically:

What does Kj in food mean? 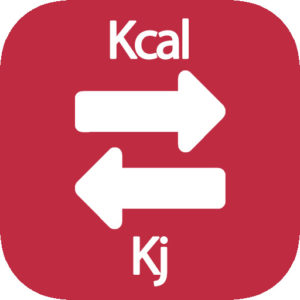 When you look at a nutrition label on a food and you see las siglas "Kj", se refiere a Kilojulios. This is a unit of energy that is not used too often in Spain, but sometimes foods are labeled in Kj.

As we said, it is not usual to see the nutritional information of a food in Kilojoules but if you come across a label that uses that unit and does not have the equivalent in Calories, you can always calculate its equivalence in Kcal using our converter.

Table of equivalence between Kj and Kcal

In order to make it clearer the equivalence between Kilojoules and KilocaloriesWe have made a table with several values that will be of great help to you.