Going from kilograms to grams is something we all know how to do, but if it's something you use frequently, some conversions may not be done mentally too quickly, so we've created a Kg to grams converter to do it automatically.

You simply enter the weight in kilograms you want to convert to grams and click on the calculate button to obtain the change of weight units. If you wish, we also have at your disposal a converter to perform the inverse operation, that is to say, convert grams to Kg.

How to convert from Kg to grams 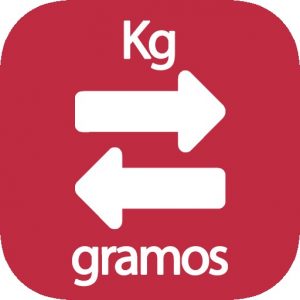 As I said before, going from Kg to grams is something quite simple since it is one of the first things we learn in school. Since the kilogram and the gram belong to the international system of units, we simply need to know that 1 Kg = 1,000 grams.

From the above equivalence, we deduce the formula to be applied for conversion:

By example,we are going from 1.2 kg to grams:

A trick to make the conversion from kg to g without a calculator consists of move the decimal point of decimals three positions to the right. If necessary, add as many zeros as positions are needed. In the example above you can see how the decimal point has been moved one position to the right and two zeros have been added to complete the two missing moves.

Half a kilo how many grams are

You don't know how many grams are half a kilo? The answer is simpler than you might think: 1 kilo is 1,000 grams, half a kilo is 500 grams which is just half.

If you want to do it mathematically with the formula, we will also arrive at the same result:

Kg to g in Excel

If you want to make your own Kg to g converter in Excelyou can prepare one in a matter of seconds. Just open a new spreadsheet and put in a cell the following function:

For the calculation to work, you will need to sustituir "C3" por la cantidad de kilos you want to convert to grams or by the coordinates of the cell in which you have written the weight in kilograms.

For example, if you want to calculate how many grams are 3 kilosthe formula should be put like this:

Table of equivalence of Kg to grams

If you need a conversion table from kilograms to gramsIn the following we have compiled a series of equivalences ranging from 0 kg to 1,000 kg, i.e., one ton.