Do you want to calculate half a number online? Do it automatically with our calculator to get half of any number, choosing the number of decimal places with which you want the result.

How to take half of a number 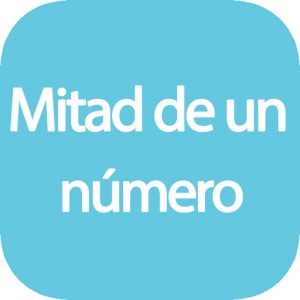 To take half of a number only apply a division between twoIt's as easy as that and even easier if you use our division calculator.

It is a calculation we can do without a calculator in many cases, unless the number of which we want to calculate its half is too complex and includes decimal places.

How to explain half a number

If you want to explain to someone what is half a numberThe best way to do this is to propose examples with even numbers because this way you do not generate decimal results that may be more difficult to understand for children or people with little knowledge of mathematics.

For example, imagine you have 6 apples so that if you want to give half to your brother, you will keep 3 apples.

Half of a number in algebraic language

Half of a number plus its square equals 36

In this case what we have is a formula in which we have to find out the number that satisfies the following equality:

Multiply by 2 to remove the division involving the x:

We move and place all the terms to the left to form the corresponding second degree equation:

We solve and obtain the values of x for which the quadratic equation is satisfied. If you do not know how to do this, you can use our calculator for second degree equations.

Half of a number minus the number itself

In this case, we first divide by two to get half the number and subtract the value of the number from the result obtained.

Half of a number minus its third part

The same as in the previous example but in this case, we subtract only one third of the value of the number so we will have to divide it by three.

Half of a number multiplied by its fifth part

We find half of the number and then its fifth part. When we have it, we multiply the results together.

One half of a number plus one fifth of it

Here we have to do the same as in the previous case but instead of multiplying the results, we have to add them.

Half of a number plus three

The square of half a number

When you have half the number, you square it.

Calculator " Mathematical calculators " Calculate half of a number