Convert from Gigahertz (Ghz) to Hertz (Hz) easily with our online frequency converter. Just enter the frequency in Ghz you want to convert to Hz and click on the calculate button.

Do you need convert from Hz to Ghz? The tool also performs the function of Hz to Ghz converter which will allow you to perform the reverse operation.

Perform the conversion of these two frequency units in a simple way and save yourself those long multiplications full of zeros where it is easy to get confused and put the comma in the wrong place.

How to switch from Ghz to Hz 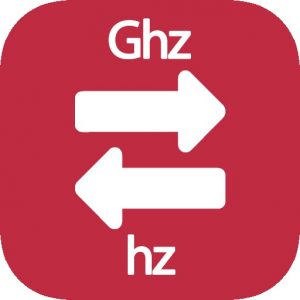 A gigahertz is a much larger unit compared to a hertz. This makes the calculations more difficult since we have to work with a large number of zeros in the operations. 1 Ghz = 109 Hz. From this equivalence, we can deduce that the formula to go from Ghz to Hz is the following:

By example,we are going to convert to Hertz the amount of 3 Ghz:

To propose another practical exampleIn this case, we are going to convert 1 Gigahertz to Hertz in the same way as in the case we have seen in the previous point:

It was clear that we were going to get this result since we had mentioned it in the explanation for going from Ghz to Hz.

How to switch from Hz to Ghz 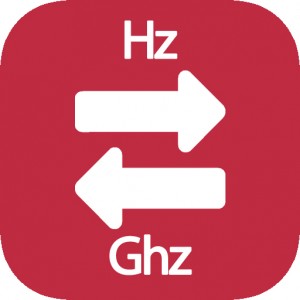 As we have said before, the real difficulty involved in the change from Hertz to Kilohertz consists of placing the comma properly. Many times we forget some zero that changes the final result completely, for that reason, we have to have very clear that:

Therefore, if we want to switch from Hertz to Gigahertz manually, we need to apply the following operation mathematics:

If you notice, the calculation can be done without using a calculator, because as we were taught as children, in this type of multiplications and divisions by factors of 10, it is enough to move the decimal point to the left or to the right. In this case, since we are dealing with a division, we have to move the decimal point 9 positions to the left to go from hz to Ghz without the need for any further calculations.

Below you have a small equivalence table that shows some of them Gigahertz to Hertz conversions from 0 Ghz to 1 Ghz. You can always print it out to have it handy with several quick references of this conversion so often used in signal problems: