A fraction is nothing more than a division, such that one number is divided by another. Fractions are composed of numerator, denominator and a line that separates both numerical quantities, so that for convert a fraction to decimal format, simply divide the numerator by the denominator.

Our calculator for fraction to decimal will allow you to convert any fraction into a decimal number. You just have to enter the numerator and denominator values and click on the calculate button. If you wish, we also have at your disposal a calculator that will enable you to change from decimal to fraction in a similar way.

How to convert from fraction to decimal?

As we mentioned at the beginning, to convert a fraction into a decimal number we only have to do a division. Specifically, we have to divide the numerator by the denominator and in this way, we can switch from one numerical format to another.

If the division is exact, we will obtain a whole number as a result, while if it is not exact, we will inevitably have decimals. Depending on the precision we need, we will have to choose more or less decimal places, although this depends on our requirements.

To put this into practice, let's convert the fraction 2/3 to decimal format:

It is clear that it is not too complex, though, working with fractions always provides us with some help when it comes to simplify factors in multiplication and division.

Try to solve your operation this way since it is always better to reduce factors than to have to drag figures with decimals. If you don't see any way to simplify, then you can convert the fraction to decimal format and continue in that direction.

How many decimals do we take if going from fraction to decimal gives us a periodic number? 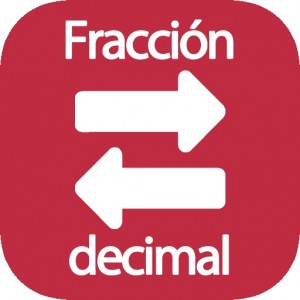 Precisely this is the case that has occurred in the previous example of 2/3. In this solved exercise, we have converted the fraction 2/3 to decimal with the calculator y hemos dicho que el resultado es 0,667 pero, en realidad, obtenemos un número periódico de 0,666666666...

Depending on the precision we want in the result, we will take more or less decimals. Normally, in an academic environment it is enough to take two or three decimal places. In addition, it is important to know which are the rules of the number rounding. In the solved exercise, as the last decimal number we have is greater than 5, then the previous decimal number must be added by one unit, leaving 0.667 if we take three decimals or 0.67 if we take only two.

If you want to make your own fraction to decimal converter using Excel, just follow the instructions below.

The first thing to do is to open a new spreadsheet and select two empty cells. In the first one we will write the fraction that we want to convert to decimal format. To do this, right-click on the cell, select the Format Cells option and from the categories that appear, select the fraction category. 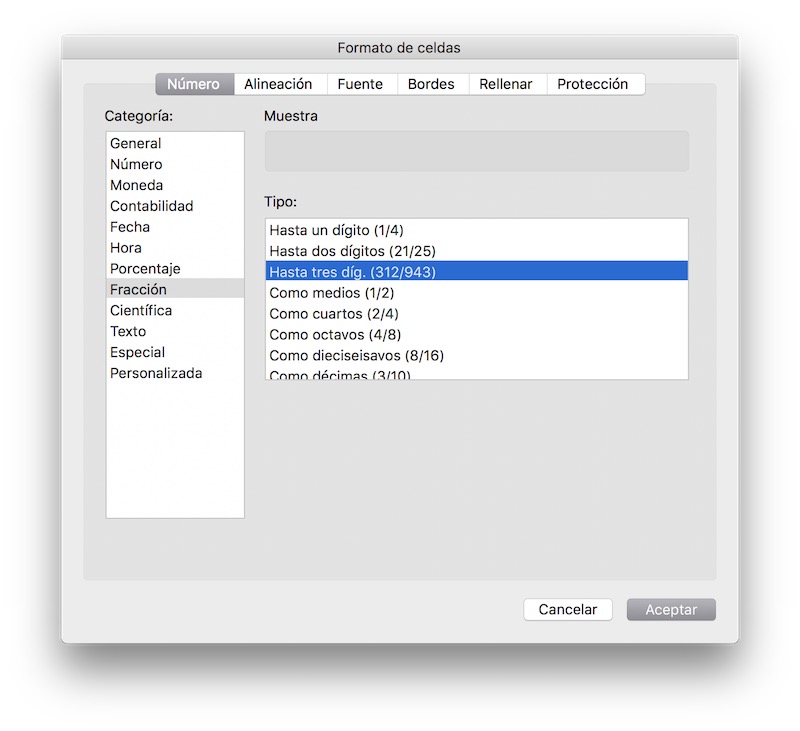 Next we go to the second empty cell and in it we write the following formula:

In our case we will have to change the coordinates A1 for those of the cell in which you have written the fraction. If you have done it right, now the fraction will also appear in that cell but to convert it to decimal format, we change the cell format to a la categoría "número" y seleccionamos la cantidad de cifras decimales con las que queremos el resultado.

If you have any doubts about the process we have just explained, we recommend that you watch the video at the beginning of this section or leave us a comment and we will help you as soon as possible so that you can convert from fraction to decimal with Excel.

How to convert from fraction to decimal number in calculator

If you want to use your calculator to convert from fraction to decimal numberIf you are not sure about the process, you just have to follow the process we have explained in the theoretical point.

To sum it up, you just have to divide the numerator by the denominator and you will automatically know the equivalence of that fraction in decimal numbers.