In case you don't remember, let's refresh what is the base and what is the exponent. For example, in 23 we have to:

If you want to calculate the exponent of an exponentiation, you can do it in the link that we have just left.

What is an exponent?

As we have already mentioned, an exponentiation is composed of two elements: base and exponent. The exponent indicates the number of times that the base factor is repeated, es decir, si tenemos 26 means that we have to multiply the number two by itself a total of six times (2 · 2 · 2 · 2 · 2 · 2 · 2 · 2 = 64).

In this case, calculating the value of the exponentiation is simple but if we work with larger numbers, the calculation becomes more complicated and it is much more convenient to use exponent calculators like ours.

If we calculate the power of a negative number, the final result can have a positive or negative sign depending on the value of the exponent. Below we explain the possible cases:

Below you will find details of the properties of powers so that you can take them into account when solving your exercises.

Any number raised to zero is equal to 1. Mathematically, this is expressed in this form:

The same is true for any other value.

In this case, any number raised to one is equal to the number itself. That is to say:

Like worked example of this property, we have this one:

Power of negative one

If the exponent of the power is a nonzero, negative integer, the power can be expressed as a fraction.

For example, let's convert the following to a fraction power with negative exponent:

Multiplying powers with the same base

If you are going to multiply several powers that share the same base, the result is a power with that base but whose exponent is the sum of the exponents.

Solved example of multiplication of powers with the same base:

Product of powers with the same exponent

In the case of having to multiply two powers with the same exponent but different bases, what we have to do is to keep the exponent and multiply the bases:

If we are going to divide several powers with the same baseIn this case the exponents are subtracted as you can see below:

This is the corresponding solved exercise of division of powers:

Dividing powers with the same exponent

In the case of having a power of power, what we have to do is to multiply the exponents as you can see in the following generic example:

If we apply it to a practical exercise, we will see it better:

How to create your own exponent calculator in Excel

In both cases, you should keep in mind that:

You will have to adapt the value of those coordinates to your spreadsheet to create a exponent calculator automated using Microsoft software.

If you are not sure what the base or exponent of a power is, read the first part of this post where we explain what each one is.

How to calculate powers in Casio calculator 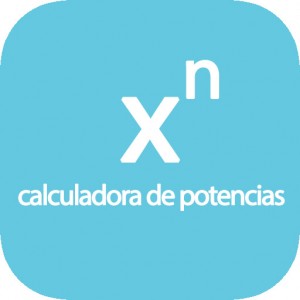 If you have a Casio calculator, you can calculate powers very easily. The most common methods are explained below.

Exponent 2 or raising a number to the square

To use the Casio calculator to square a number, simply locate the key with the x2 symbol engraved on its surface.

When you have located it, simply type the number to be squared, press that key (x2) y, a continuación, presionas el igual (=) para obtener el resultado.

Exponent 3 or raising a number to the cube

Negative exponent or any other number

For some time now, Casio calculators have allowed us to raise any number to any exponent, even if it is a negative number. To achieve this, the first thing to do is to locate the key that has an x raised to a blank square o, en algunos casos, también está representada como xy.

In the video we have just shown you, we explain how you can calculate powers with any exponent, including negative numbers, using a CASIO calculator.

How to use the power calculator

If you're not quite sure how to use our power calculator, we've recorded a video in which we propose several practical examples so that you can solve any doubt about how it works. We hope it will be helpful, but if you still have any doubts, leave us a comment and we will help you as much as we can :)

Remember that you can subscribe to our social networks or share this post among your friends, you will help us a lot and it is a way to thank us for our work.

Addition and subtraction of exponents

How to add and subtract exponents is one of the most frequent doubts when facing an operation.

In both the addition and subtraction of powers it is essential that solve them individually and add up the value of each one. to obtain the result of the operation.

In no case may you add the exponents or the bases. because the result you will get will be wrong. You can check this as we have indicated before, that is, solving each exponential individually and checking that you do not get the result.

If we do it step by step we have:

If we do it in the wrong way adding the exponents let's see what happens:

As can be seen, the result is NOT the same and is correct only in the first case.