Do you need calculate the divisors of a number online? Use our calculator and you will get all integers and prime factors by which that integer can be divided.

Its operation is very simple. You only have to write the whole number (without commas or decimals) for which you want to get the divisors and then click on the Calculate button to obtain the result.

What are the divisors of a number?

The following are called divisors of a number those values that allow us to make an exact division to that quantity, that is, the remainder that we obtain is zero. For example, if 2 is divisor of 100, we can say that:

Any of the three previous statements would be correct and come to express the same thing, albeit in different words. Expressed mathematically, this boils down to the fact that

How to calculate how many divisors a number has quickly

There is a very quick method for find out how many divisors a number has very quickly. These are the steps to follow:

For example, if we decompose the number 432 into prime factors, we get that it is equal to

How many divisors will it have? For that we multiply the exponents of the prime factors but increased by one unit. That is to say:

Therefore, 432 will have a total of 20 divisors. You can use our divisor calculator to check that the answer we have obtained is correct.

How to calculate the divisors of a number

To calculate the divisors of a number we have to take into account the divisibility criteria. In addition, the 1 and the number itself will always be divisors but the rest will have to be calculated.

If the number is small, we can make divisions manually or with the calculator to see if the division is exact and that number is divisor. However, if you do not remember these divisibility criteria or the number is very largeThere is a mechanical method to do it, which we will see with the number 432 that we saw in the previous section.

The first thing to do is to do its factorial decomposition, which we have already solved:

Next we create a table in which we will place the powers of 2 from 20 up to 24 in the top row. In the left column we will put the powers of 3 ranging from 30 up to 33. In case you find it useful, above you will find a video explaining the method we are going to use to solve the examples but with other quantities so that you can continue practicing for an exam.

Then we will fill in the next row by solving the following multiplications:

And so on until the entire table is completed.

If we have done it well, it will look like this:

We already have the 20 divisors of the number 432 calculated. You can repeat this process for any other number. The only thing to keep in mind is that if the number has more than two prime factors, you will have to divide the process in several steps. 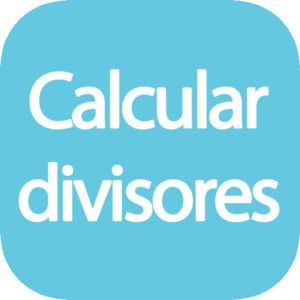 We will calculate the divisors of the number 360. As we have seen in the previous point, the first thing we have to do is to proceed to its decomposition in prime factors:

Then we generate the table with the powers of 2 and 3 as explained above:

We need to take into account the prime factor 5, for which we will build a new table that will have in the first row the numbers obtained in the previous table. In the left column we will place the powers of 5:

Now we have all the divisors of 360 calculated.

If after our explanation you have any doubts or do not know how to use the how to find the divisors for a number If you have any specific questions, write us a comment and we will help you clarify your concerns as soon as possible.