If you're working with trigonometry problems, then you're probably tired of convert degrees to radians or the reverse operation. Precisely for this reason, our angle to radians calculator will save you this repetitive calculation.

Its operation is very simple. Simply select the type of conversion you want to perform, enter the angle figure and click on the calculate button. You will automatically have the conversion of your angle in radians or degrees.

How to convert from degrees to radians

To simplify the calculation even more, all you have to do is to multiply degrees by π/180. Let's see it with some practical examples:

Formula to convert from radians to degrees 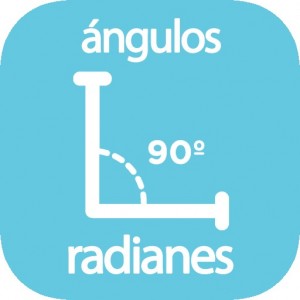 Now let's look at the mathematical formula to perform the reverse conversion, i.e., for from degrees to radians. Since we already have a formula from the previous section, we will simply clear the unknown of the radians.

In this way, to change from radians to degrees we only have to multiply by 180/π. Let's see it with some examples to make it clearer:

How much is one radian equivalent in degrees

Following the theory seen in this section, we will calculate a when is 1 radian in degrees.

How to convert from degrees to radians in Excel

You simply select a cell in which you want to display the angle in radians and write the following formula:

Where A1 is the coordinates of the cell in which the angle in degrees you want to convert to radians. If you wish, you can directly write the angle value in degrees between the brackets of the formula, so you do not create dependency with other cells.

If you have any doubts, in the video we have recorded we explain how to switch from degrees to radians in Excel with several practical examples so that you can replicate it yourself.

How to convert radians to degrees in Excel

In reverse order to the previous point, we can also use Excel to convert from radians to degrees. In this case, you know that radians are usually expressed as a function of PI so I recommend you to create a spreadsheet that has two cells.

In the first one we will write the angle in radians that we are going to convert to degrees. To do so, we write the following formula:

A1 being the coordinates that point to the cell in which you have written the angle in radians that you want to convert to degrees.

Below you will find an equivalence table with some of the most important main conversions from degrees to radiansYou can print it out and carry it with you at all times to make unit changes for the most common values used in math problems.

How do I know if the calculator works in degrees or radians?

One of the most frequent errors in math exams is related to the use of the calculator in degrees or radians when we should use the opposite unit.

By default, Casio scientific calculators are usually set to work in degrees but if you want to be sure, look at the top of the display:

To change from one mode to another, the procedure is different depending on the model of calculator you have. In some casio calculators you will have to press the MODE key until the following screen appears:

There are other newer Casio calculators in which you will have to press the SHIFT key and then the MODE key to enter their configuration mode. When you do so, you will get the following screen:

How do you convert from degrees to radians on the calculator?

To learn how to do this, the first thing to do is to locate the ANS key, which is usually found to the left of the equal. You will see the letters DRG at the top.

Once the ANS key is located, if the calculator is configured to work in degrees (a D will appear at the top of the screen), you can convert to radians easily by following these steps:

If you have done it right, the change of degrees to radians with the calculator automatically.

In the same way as in the previous case, if you have the calculator to work in radians (an R will appear at the top of the screen), you will be able to convert to degrees immediately.

Just repeat the same steps as before but in the third step, select option 1 (represented by º).

How the degree to radian converter works

We have recorded a video in which we explain briefly how our degree to radian converter works and vice versa from some practical examples. If after watching the video you still have doubts, leave us a comment and we will try to help you as soon as possible.