Do you know how to go from decimal to hexadecimal? While we use the decimal system by default, in some cases related to the computer world, it is essential to work with the decimal system. hexadecimal format in which we have a base 16, forcing us to make a conversion between the two systems.

Our decimal to hexadecimal converter will do that conversion for you, saving you all the calculations behind it. Of course, we also have the inverse converter available that will allow you to from hexadecimal to decimal.

How to convert from decimal to hexadecimal

For convert a number from decimal to hexadecimal There are several ways to do this. The one that I personally find the easiest is to pass the number of decimal to binary.

Once we have it, we will go from binary to hexadecimal. For this purpose, we do groupings of 4 numbers starting from the right. If at the end we do not have a group of four numbers left, we fill in with zeros to the left until the missing digits are completed.

Finally, we look for the equivalence of the groups of 4 digits in binary with its corresponding hexadecimal symbol.

By example,As we have said before, the first thing we will do is to convert it to binary:

Now we do groups of four symbols starting from the right and we are left with this:

Notice that since we did not have enough digits, we have filled in with a zero to the left to have a second group of four symbols.

Finally, we look for the correspondence of the groups in binary with its equivalent in hexadecimal and we have that:

Therefore, we conclude that the number 73 in decimal is equivalent to 49 in hexadecimal.

If you want to see for yourself, use our online calculator and you will see that this is the result we have just obtained.

There is another method for transforming a decimal number to hexadecimal but we believe it is much more labor-intensive and involves more risk of error.

Change from decimal to hexadecimal in Excel

Between the brackets you have to write the decimal number you want to use convert to hexadecimal. This is simply enough.

For example, if you want to switch to base 16 the decimal number 1678, the Excel function would be written like this:

It is one more utility of the Microsoft program that is always good to know in case at some point you cannot consult our calculator. 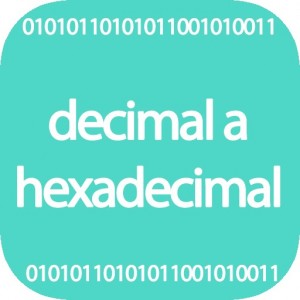 The following are some examples of equivalence between decimal and hexadecimal. If you wish, you can print this table and have it as a quick reference for those moments when you cannot use our online converter.

Notice that since the hexadecimal uses base 16 and our decimal system only goes from 0 to 9, the first letters of the alphabet are used to cover the rest of the missing symbols.

To put into practice all that you have learned about how to convert from decimal to hexadecimalBelow are some solved examples for you to practice:

If you want more examples you can create them yourself. Just select any decimal number at random and do the decimal to hexadecimal conversion. Afterwards you can use the hexadecimal calculator to check if you have done it correctly or need to revise it.

If you have any questions about this conversion, leave us a comment and we will help you as soon as possible.

2 thoughts on “Decimal a hexadecimal”