Change from decimal to binary is possible with our online calculator. The operation of this binary translator is very simple since you only have to enter the number in decimal format that you want to convert to binary and, finally, press the calculate button to obtain its equivalent in binary.

If you wish, we also have at your disposal a calculator to convert from binary to decimal.

How to convert from decimal to binary 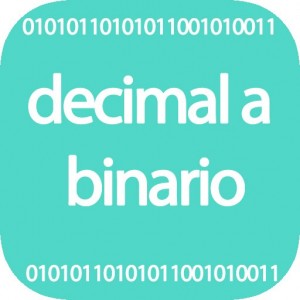 To convert a decimal number to binary, we must divide by 2 as many times as necessary until the quotient is 1 or 0.. In addition, we must write down the remainder that we obtain in each of the divisions.

As the explanation is a bit confusing, let's look at an example of a how to convert a decimal number to binary manually by division by 2:

When we have made all the divisions by two possible, to form the binary number we have to write the list of zeros and ones that we have obtained but from the bottom to the top otherwise, we will misspell the result.

How to convert from decimal to binary in Excel

Excel has a specific function that allows us to convert from decimal to binary automatically, although it has the limitation that we cannot exceed the value of 511 or the Microsoft program will return an error.

If for you this limitation is not a problem and you are going to work with decimal numbers less than 511 to convert them into binary, then you simply type the following formula into a cell of your spreadsheet:

Remember that A2 are the coordinates we have used in our example spreadsheet and that you will have to modify them to adapt them to yours. If you prefer, you can also write the decimal number directly between the parentheses to convert it to binary. In this case, you would have to write the following formula:

This Excel function also has a second, completely optional argument that allows us to set the number of characters you want the result to be displayed with. For example:

If you have any doubts, we recommend that you watch the video in which we perform several practical examples at Excel to convert from decimal to binary. If you still have doubts, ask us and we will try to help you as soon as possible.

Below we have compiled a list of decimal to binary conversion table in which you can see several examples of the equivalence between both number systems.

If you wish, you can print this table to have it always at hand and thus have a quick reference for quick conversion between decimal and binary.