Calculates the cosine of any angle in degrees or radians with our online mathematical calculator that will allow you to easily find out the value of this trigonometric ratio.

The operation of this online cosine calculator is very easy. Simply enter the value of the angle and select the type of units (degrees or radians). Then press the calculate button and you will automatically know the cosine of the angle you have entered. Remember that the cosine of an angle can only take values between -1 and 1.

Remember that we also have at your disposal other calculators related to the world of trigonometry:

How to calculate cosine

If we are given a right triangle like the one in the image and we are asked to calculate the cosine, we will have that dividing the adjacent leg by the hypotenuse.

That would be the basic formula to calculate this trigonometric ratio.

Here is one graphical representation of the cos(x) function in which you can see all the values it takes in the interval [-2π, 2π].

As can be seen, it is a periodic function whose domain belongs to all the real numbers. Below you will find a table with the main values that this trigonometric function adopts in all its interval.

For example, in the graph you can see perfectly that the cosine of pi is equal to -1.

Table of the cosine function

If you need to know at a glance the values of the cosine of principal anglesBelow you have a compilation that will be very useful in trigonometry problems.

How to calculate the cosine of an angle with a calculator 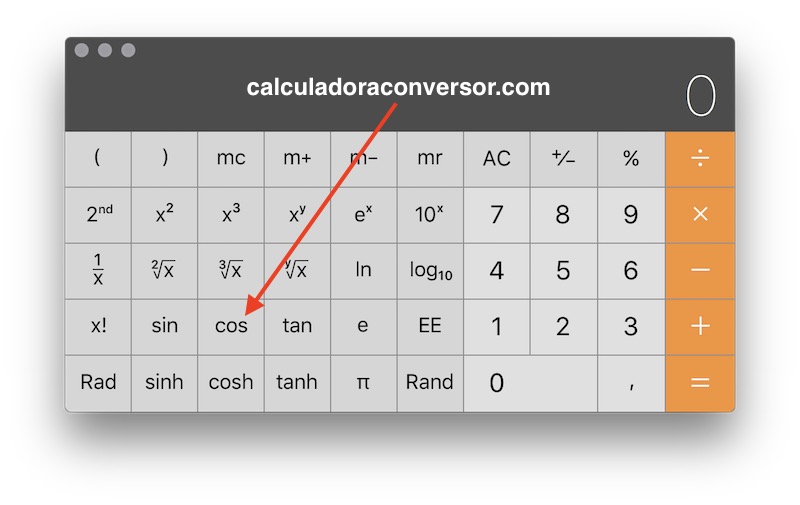 If you want to Calculating the cosine of an angle with the calculator scientific, the first thing to check is whether it is set in degrees or radians. This is vital since 60 degrees is not the same as 60 radians. If you would like more information, in our degrees to radians we explain in more detail the differences between the two ways of expressing angles.

Once you are clear on the above point, calculating cosine with the calculator is very easy. Simply press the key marked COSIf the angle is not the same, type the angle and press the = key to obtain the result.

For example, if you want to calculate the cosine of 45 you must press the following key combination:

And it will automatically appear on the screen that the cosine of 45 is equal to 0.707.

There is another form of cCalculate the cos of an angle using Excel and a function with precisely that name. However, by default Excel works in radians, so pay attention to the formula you should use in each case.

If you want to calculate COS in radiansyou must write the following formula in Excel:

And between the parentheses you write the angle expressed in rads.

If you want to calculate the cosine of an angle in degreesyou should write the formula like this:

In this case we have obtained the cosine of 90 but you can change the number to the angle in degrees of your choice. 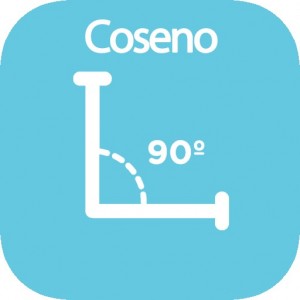 The derivative of the cosine of x is equal to the minus sine of x.. Mathematically this can be expressed as follows:

If instead of x we have a function uthen the derivative will be equal to the derivative of the function u multiplied by the minus sine of u. This would be expressed mathematically as follows:

These are the basic derivatives of the COS function.

You already know that the integral is the opposite operation to derivative so we could deduce it from the theory seen in the previous point. Anyway, we are going to make it easy for you and here you have what is the cosine integral of x:

If we have the cosine integral of a function u by its derivative, then the result of the integral will be:

If you have any doubts or questions regarding the cosYou can write us a comment and we will give you a hand as soon as possible. And if you liked it, share it on social networks or leave us another comment thanking us for our work, we also like that :D 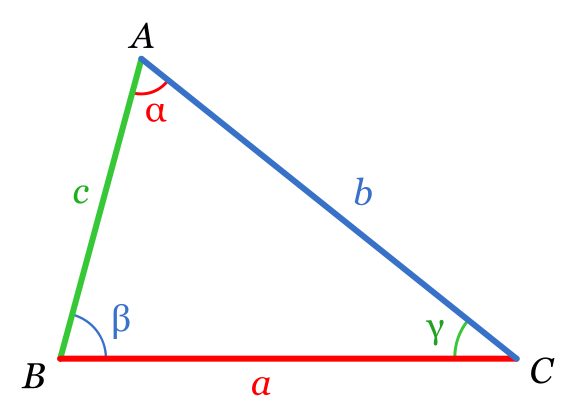 The Cosine Theorem (also known as the law of cosines), allows us to calculate the missing sides and angles by relating one of the sides of the triangle to the two remaining sides and the cosine of the angle they form.

In case the theoretical explanation is not very clear, here are all the information you need to know. cosine theorem formulas that will help you to solve triangles:

If you look at each of the formulas, all respond to the same pattern calculation:

Combining the cosine theorem with the Sine Theoremwe can solve triangles in a simple and effective way. 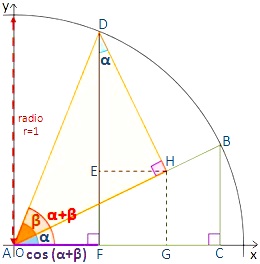 The cosine formula of the sum angle is as follows:

The demonstration of the cosine of the sum angle is deduced by calculating how much the segment AF is worth:

We also know that:

Substitute and it remains that:

Now we calculate how much the segments AG and EH are worth,

We substitute and we have that:

Finally, we substitute in the first equation that we have at the beginning of the demonstration and we have that:

Below you have the cosine formula of the double angle:

The double angle (2a) has its own trigonometric ratios and the cos of the double angle is one of them, a formula that is deduced from the formula for the cosine of the sum angle that we have seen in the previous point (α = β).

For example, let's solve this exercise in which we will obtain the cos of the double angle of 30º: