Do you want to calculate centripetal force online or clarify concepts related to this force acting on moving objects with curvilinear trajectories?

Read on and you will find a calculator, the formula, solved exercises and much more.

If you need calculate the centripetal force of an object, our calculator can help you with that. Just enter the mass in Kilos of the object and the normal acceleration it has while describing its curvilinear trajectory.

When you have done so, click on the calculate button and you will automatically get the value of the fCentripetal force in Newtons.

If you would like to know more about this force experienced by the objects describing a curved pathread on and we will solve all your doubts about its calculation. 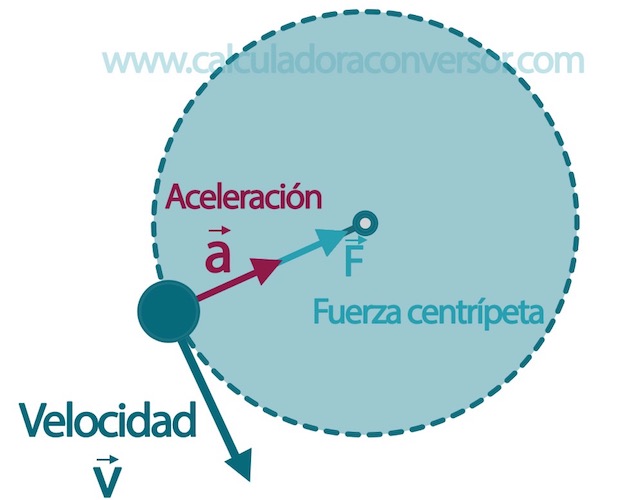 When an object performs a curvilinear trajectory, ehe velocity vector must change direction and direction at each point, so it is the centripetal acceleration that makes this happen.

The centripetal force is in charge of endowing that object with such centripetal acceleration.

As can be seen in the diagram above these lines, the centripetal force is a vector whose direction is the radius of the circumference and its direction is towards the center. Its modulus is constant.

Difference between centripetal and centrifugal force

What is the difference between centripetal and centrifugal force? Are they the same? Not really, even though they are closely related. Let's see what the differences between them are.

If the explanation is not very clear, let's imagine that we are riding on a carousel like the one in the following picture:

While the attraction is in motion, each of the platforms describes a circular motion and, therefore, has centripetal acceleration as we have seen in the previous point.

If they have such centripetal acceleration, it is because there is a force that originates it and it is the centripetal force. This can be seen in the tension of each of the chains that hold the platforms.

So far, there is nothing we do not know. However, if we ride on one of the platforms our reference system becomes non-inertial since our platform and we move at the same time.i.e., we have the same acceleration.

This non-inertial reference system creates the illusion that the platform on which we are riding is at rest. since it is always under our feet, however, the attraction rope is still taut so the centripetal acceleration is still there. 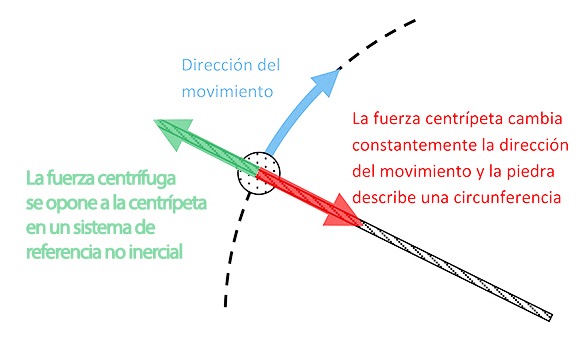 The centripetal force formula is as follows:

In this formula we can distinguish several variables:

Centrifugal force has no formula since it is a fictitious force that we invented as we have seen above.

Here are some of them examples of centripetal force which you can then develop as solved exercises by applying the formula we have seen above. You would only have to give the object mass and centripetal acceleration.

Car in a curve

A 1500 kg car travels along a road at 120 kilometers per hour when it traces a curvature whose radius is 100 meters, thus experiencing a centripetal force until it exits the curve. What is its value?

A ball attached to a rope that spins in circles

If we tie a ball to a string and make it spin in circles, during the circular trajectory the rope is supporting centripetal force that allows this curvilinear turn. Calculate its Fn if the ball weighs 200 grams and has a centripetal acceleration of 15m/s2.

Can you think of more examples of centripetal force for exercise? If you want more or have a problem you don't know how to solve, leave us a comment and we will help you solve it.

There is relationship between centripetal force and gravitational force. Newton proved it with the Law of Universal Gravitation in which it is specified that every particle in the universe can attract another particle with a force F.

This force varies proportionally according to the masses of these particles and inversely proportional to the square of the distance separating them in a straight line.

This means that the force of gravity acts as a centripetal force since its vector is radial, it is directed towards the center of the Earth.

A clear example can be seen with the Earth and the Moon. The centripetal force is the gravitational field exerted by our planet on the satellite (the moon).

Why centripetal force does not do any work 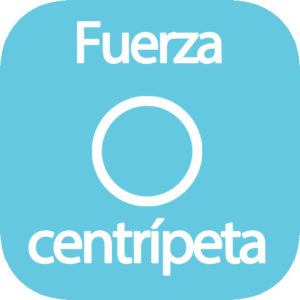 There is a reason why it is said that the centripetal force does not do any work.

The working definition tells us that we must exert a force on an object and the object must move in the direction of the force. applied.