Calculate the density of a material is something quite frequent in physics and thanks to this magnitude, we can relate the mass of the object with respect to the volume it occupies.

How density is calculated

In order to calculate the density of a material we have to apply a mathematical formula which relates mass to its volume. The density formula you can see it below:

Mass is the weight of the object (no distinction is usually made between mass and weight) while volume is the space occupied by the object.

Obviously, from this formula for calculating density we can find out the value of any of the three unknowns involved in the operation. We simply clear the one we are interested in and that's it. For example:

With the first one we can obtain the weight of something from its density and volume while in the second case we can calculate volume from density and its mass.

Units of mass and volume are very important with which we are going to apply the density formula. Normally, the Kg and the m3 respectively, but depending on weight and size, we may have to use smaller or larger ones.

If we use the kilogram and the cubic meter, the unit of density we will obtain will be the Kg/m3. However, in the International System of Units we find other units to express density:

These are some of the most commonly used units but there are many more, especially if we take into account those used in the Anglo-Saxon system of units, but this is not usually the case given that in Spanish education, we always work with units that belong to the International System.

Because of the above, it is vital that we write the units correctly next to the result, otherwise, we risk getting a wrong evaluation of the exercise or dragging an error in future calculations that depend on the density.

Density of some elements

As we know that you are curious about the density of some elements, we are going to show you some of the most common ones:

Do you want us to add that of any other element? Leave us a comment and we'll be happy to do it.

Definition of density for children 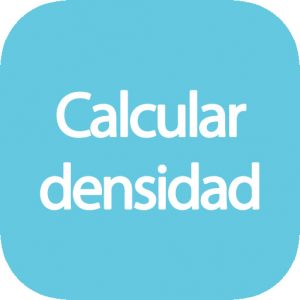 For example, air and iron do not have the same density, and we can easily prove that by imagining a soccer ball (which is filled with air) and a ball made of ferrous material. Don't you know which one is going to weigh more? That is precisely because the density of the material is much higher for iron than for air.

With this example, a child will understand perfectly well what density is.