Binary code to ASCII code converter based on the Latin alphabet. We also have available a ASCII to binary converter to perform the reverse conversion.

How to convert from binary to ASCII

Convert from binary to ASCII is very simple since each symbol has a unique equivalence in the ASCII alphabet. You only need to consult the ASCII table and look for the corresponding symbol in each combination of ones and zeros.

Let's see an example in which we are given a word written in binary and we need to pass each symbol to ASCII to decipher its meaning:

As mentioned above, the process consists in look up the ASCII symbol that corresponds to each binary combination in the table.

Binary to ASCII in Excel

If you have Excel installed on your computer, you can create your own binary to text converter. You will have to write each binary grouping in an individual cell and apply the following formula to get the corresponding alphabet symbol:

You will only have to change the C3 coordinates to the ones you have used in your spreadsheet.

You also have the option of writing the binary code directly in the formula. For example, if you want to know the ASCII equivalence of the symbol 1010010 you can write this function in excel:

If you have any questions with the conversion from binary to decimal or ASCII, leave us a comment and we will help you as soon as possible.

How the binary to ASCII converter works 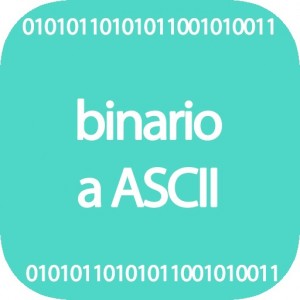 Our binary to ASCII converter works very simply. All you have to do is enter the binary string taking into account that each printable ASCII character is made up of 7 bits.

This last piece of information is very important because if we enter strings of less than 7 binary bits, the converter will not return any result. For example:

If you have problems using the tool, don't hesitate to leave us a comment.