The ASCII code refers to a character code based on the Latin alphabet, using a total of 8 bits to represent each of these characters. If you would like to know the equivalence between a text with symbols included in the ASCII and binary code, use the converter below.

If what you need is a converter of binary to ASCII, do not hesitate to visit the link that you have just behind these words.

How to convert ASCII to binary 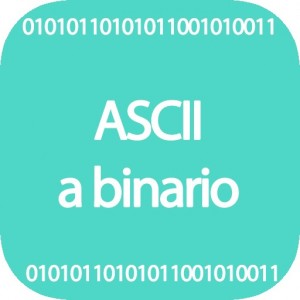 ASCII to binary conversion is very simple. The only thing we need is a table that shows the equivalence between these two systems, so we will take each ASCII symbol and pass it to its equivalent in binary, there is nothing else to do.

For example, if we want to convert the string "Hola Mundo" from ASCII to binary, we will have this:

As you can see, each ASCII symbol is equivalent to 8 bits in binary.

Converting ASCII to binary in Excel

Although Excel does not have a specific function to make the ASCII to binary conversionIf we do, we can create a combined formula that allows us to make the change:

If you want to understand the formula, what we do is:

For example, if we want to know how to write in binary the ASCII symbol '@', we will put the formula in Excel like this:

Below you will find a list of all the ASCII alphabet symbols translated to binary. You will find them organized in two blocks: control characters and printable characters.

If you want to visit a ASCII table If you need a complete list of the equivalences in other number systems, click on the link we have just left you.

These are the first 32 ASCII codes that are used to control devices.

These are all the ASCII symbols that can be printed on the screen. Here we can find the letters, symbols and numbers of our alphabet.