Do you need calculate the average of several numbers? Use our online arithmetic mean tool.

You only have to write the numbers separated by a space or comma and click the calculate button to obtain the online average. If you are going to enter decimal figures, type a . as decimal separator (2.82, for example).

What is the average?

The mean of a set of numbers is the average value obtained by adding all the quantities and dividing by the number of samples.

This definition can be expressed mathematically as follows formula for calculating the average:

How to calculate the average 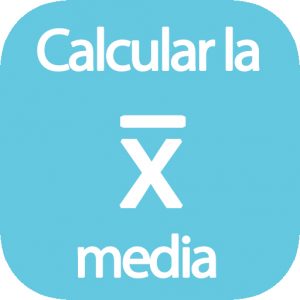 As we said in the previous section, to calculate the arithmetic mean of several numbers we have to add all the values and divide the result by the number of numbers.

First, we add up all the amounts:

Now we divide the result by the number of samples in the set, i.e. 5:

That would be the arithmetic mean of the set of numbers involved in the example.

The arithmetic mean symbol is an x with a bar over it as shown in the image above these lines.

If you want to write the symbol for the arithmetic mean on the computer, you can copy the next character:

In HTML or hexadecimal you can write it using the following codes:

How to do the arithmetic mean in Excel

The Microsoft program includes the AVERAGE function which allows you to calculating the arithmetic mean in Excel very easily and automatically.

To do this, all you have to do is open a new spreadsheet and write in it the list of numbers for which you want to calculate its average value.

For example, let's imagine that you have a set of 10 numbers that you have written in the cell interval A1:A10. To calculate the average of those values, you have to position yourself in an empty cell and write the following formula:

You can also type the numbers directly into the formula. For example, if we want to calculate the average of the practical example we gave in the theoretical section, we would have to write the formula in Excel as follows:

The weighted arithmetic average is applied when each of the elements of the set has an importance or weight with respect to the rest of the data.

In this case, to calculate the weighted arithmetic mean we have to multiplying each of the data by its weight and add the values we obtain. Subsequently, we divide the result by the sum of each of the weights.

For example, let's assume we have the following data set:

First we multiply each number xi by weight wi and add the values:

Now we divide the result by the sum of the weights:

How our online averaging calculator works

Our calculator to average several numbers also offers other statistical values such as standard deviation or variance.

Its operation is very simple since you only have to enter the numbers separated by commas or spaces and press the calculate button to get the result you are looking for.