Do you need a three parallel resistors calculator? You're in luck, here's one to get the equivalent resistance of this configuration of resistors in a circuit.

Its operation is very simple and all you have to do is write the resistance in Ohms of each of the three resistors and when you have it, press the calculate button to obtain the result instantly, without the need for manual calculations.

Connection of resistors in parallel

For calculate the equivalent resistance of several parallel resistors connected, we must apply the formula above these lines.

To avoid making mistakes in the calculations, it is best to break the formula into two steps. First we calculate the sum of the inverses of each resistor and, when we have the result, we calculate its inverse to know the equivalent resistance.

First stepCalculate the sum of the inverses of each resistor. Thus, we have that:

Second stepCalculate the inverse of the resistance just obtained: 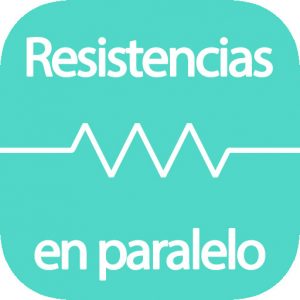 If we want to solve the previous example but using our three parallel resistors calculator onlineIf you want to use a resistor, you only have to fill in the value of each resistor in the corresponding field. The order in which you write it is irrelevant so you don't have to respect it.

When you have written the value of the three parallel resistorsSimply press the calculate button and you will automatically get the result without the need to apply the formula for calculating parallel resistors.

This saves you time and, above all, calculation errors.